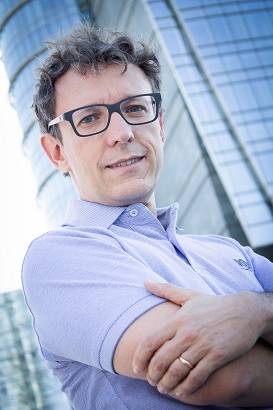 I was born in Genoa, Italy, in the year when Intel launched the first dynamic RAM chip with a total capacity of 1 Kbit. I grew up in a small coastal town on the Mediterranean Sea. As a teenager, I had a lot of friends, I was a boy scout, I rode a dirt bike, and I played with a ZX80 Mattel Aquarius PC. I then upgraded to a Commodore 64, bought the book with its OS disassembly and started writing code in assembler. That was fun, so I decided to study electronics and communications engineering!

I learnt and used C, C++, Perl, and played with powerful Sun workstations. In those years, Linus Torvalds released the first version of the Linux kernel. But what really excited me was Mosaic, and Gopher, and the Internet magic that was happening all around. I was there when our university brought up its first “huge” 2 Mbit/s link straight to New York! At night I could use my home phone to dial-up to the university gates and connect straight from my room to work on a MasPar supercomputer located in California. It was just fantastic.

I graduated when Sun Microsystems announced Java, when the first acts of censorship on Usenet newsgroups hit the news, and when the first control over licensed software spread panic everywhere. All signs that I had to grow up.

I started my career as a software developer with the first independent Italian Internet Service Providers, implementing access control systems. I then covered different software, IT and network management roles in various Internet startups and companies in London, Paris and Brussels. I got married and decided to move back to Italy, this time to Milan. With me, I brought the idea of building a MPLS-only legacy-free IP networks. Tiscali, an Internet service provider that was aggressively expanding in Europe, liked that idea; the project was given a name (“Tinet”), a team and funding; I led its technical department and built and grew the network. In the years that followed we had two daughters, while the network became the 4th largest IP backbone worldwide. It had become too big for Tiscali, and so Tinet was successfully sold to Chicago-based Neutral Tandem, where I stayed for a few more years. In 2013 I left and invested in new startup projects which aimed to connect technology and health. I learnt how to build a company from scratch, design, produce, launch and market consumer products, structure and deliver on a business plan, look for and get VC funds, build a marketing plan, run traditional and digital advertising, engage opinion leaders, present, sell, hire, dismiss, expand, reduce…

Through it all, I never forgot my love for cutting edge technology. In 2018, I saw the potential in blockchain technology and how it could really be disruptive enough to change the world; I knew I wanted to be a part of it! I joined Horizen Labs, working closely with their core technical team, learning and contributing to their continuous effort in innovation.